More proof I have no clue what I'm talking about. 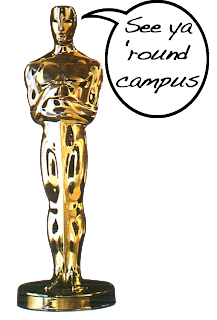 Not long ago I judged the Student Academy Awards. Which is a pretty prestigious honor, by the way, but not the point here.

One film in particular captivated me. I don't think I'm supposed to reveal which one because the awards haven't been announced.

The thing was, it didn't captivate most of the other judges.

One of the other judges liked it as much as I did, but she had to leave before we were finished, so it was up to me to fight for the film. Which I did. I managed to get it a second shot, to have it screened in front of the entire judging panel at the finals.

Where it went down to defeat.

The films that were selected weren't bad, but frankly, they didn't have something that this one did. They all had heart, story, and craft, but this one also had something extra. It broke ground. The filmmaker understood the potential of the medium and told her story (I think I'm allowed to reveal that she was a her) in a way that could only have been told on film.

Unfortunately, at the finals, I couldn't make that case. All we could do was vote.

So what's my point?

It's not that I don't know what I'm talking about. And it's not that the other judges were idiots. It's that my opinion is just that. My opinion.

This is a tough lesson to learn, especially when you're starting out. But most people you show your work to aren't going to get it. Those that do will never –– and by never I mean really, really rarely –– like it as much as you do.

I wish I could talk to the filmmaker of that film that isn't going to win a Student Academy Award. I'd tell her that she's a prodigy. That her audience, in spite of being a prestigious panel of filmmakers, wasn't sophisticated enough to understand what she accomplished.

And I'd tell her to keep working. Because the only way she'll ever find an audience is to create stuff and put it out there.
Fabricated entirely by Brian Belefant, DGA at 4:38 PM No comments: