A 46-year-old advertising lesson and the boneheads who refuse to learn it.


In my capacity as a consultant to a certain automotive group, I was recently asked to review Buick's new TV spots. One features Squaquile O'Neal talking about how spacious his Buick LaCrosse is.

Take a look and see if anything strikes you as... uncomfortable.

See that? The part where he's wedged into the driver's seat? 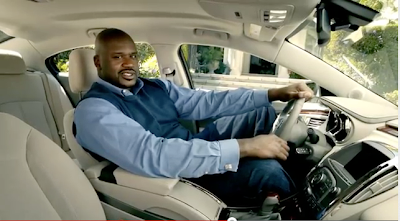 The seat is all the way to the back and the poor guy still can't get his legs under the steering wheel. That car isn't going anywhere –– not with Shaq in it.

Here's the deal. Saying that Shaq is a big guy is like saying Donald Trump has a healthy ego. He –– O'Neal, not Trump –– stands 7' 1" tall. (For the record, The Donald is 6' 3", which actually qualifies him as a big guy, particularly compared to an average someone like me who stands 5' 9".)

The LaCrosse may actually be roomy. It probably is. But cramming Shaq into the front seat in order to make that point is ridiculous. Even if you could make it look as if Shaq fits into the front seat of a LaCrosse, the best you can hope for is that 7-foot-tall guys will swing by the dealership, only to have them realize the extent to which you were lying.

Good for Buick? I'm going to say no.

What makes this spot particularly interesting is how nicely it parallels the situation in 1966. Back then, Volkswagen wanted to convince people that the Beetle was roomy. 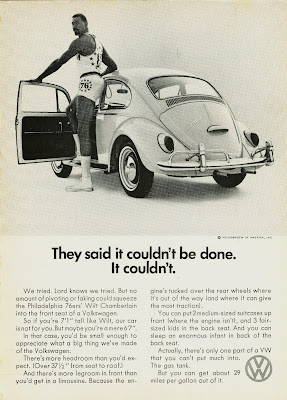 In case you can't make out the body copy, here's how it starts:

We tried. Lord knows we tried. But no amount of pivoting or faking could squeeze the Philadelphia 76ers’ Wilt Chamberlain into the front seat of a Volkswagen.
So if you’re 7’ 1” tall like Wilt, our car is not for you. But maybe you’re a mere 6’ 7”.
In that case, you’d be small enough to appreciate what a big thing we’ve made of the Volkswagen.

A lot has been made about how Volkswagen's ad agency, Doyle Dane Bernbach, revolutionized advertising in the 1960s by creating powerfully motivating messages with honesty and empathy.

But the sad truth is that for all Doyle Dane Bernbach and its ilk did to show how mass communications could be created with respect for consumers, that revolution has clearly failed. Forty-six years down the road, companies like Buick continue to create unmotivating, unbelievable turds. And today, unlike those Mad Men days when integrity and conviction were the tools deployed to support decisions made based on common sense, ad agencies and clients alike defer to legions of "consumer advocates", analysts, and brand strategists who rely on "powerful tools" like focus groups, quantitative research, and consumer insight studies to develop messages that "resonate".

Call me old fashioned, but I think there's a really simple way to tell whether any of those experts deserves the six-figure salaries they make: See if any of them would spend their own money to buy a LaCrosse.
Fabricated entirely by Brian Belefant, DGA at 11:13 AM 7 comments: