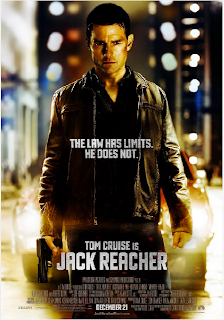 I don't like Tom Cruise. Personally. Which is ridiculous because I've never met him. There's just something about him that doesn't sit right with me.

So whenever I go to see a movie he's in, it's with the expectation that I'll dislike it.

More often than not, I'm disappointed. Meaning I end up enjoying his movies and even liking him in them.

And yet I refuse to budge from my position on him.

I feel like a Republican congressman on an anti-gay crusade who can't help but hook up with strangers in the airport men's room.

Okay, not quite, but you know what I mean.

Sure, it's a thin premise. The main character has lapses in the very characteristics that are supposed to define him. The story veers from action to farce, sometimes in the same scene. The whole conspiracy (action films are always about conspiracy) is a house of cards built on a huge flaw. And the woman who plays opposite Cruise? Who let her onto the set? Were all the trained actresses in Hollywood out getting their lips Botoxed the day they cast that role?

Still, it's a fun ride. And up until the end, it's a Hollywood movie.

And then it does something remarkable. It breaks one of the biggest unspoken precepts of American filmmaking. Yes, I'm going to give away the ending. (If you don't already know that the bad guy dies in the end of a film like 'Jack Reacher', please stop reading. Not just this post. Stop reading this entire blog. You're singlehandedly bringing down the average IQ of my readership by a substantial number of points.)

What's interesting about 'Jack Reacher' isn't that the bad guy dies in the end. It's how. Tom Cruise kills him. Not in a protracted fight. Not in self-defense. He pulls out his gun and shoots him in the head.

This does not happen in a Hollywood movie.

Think about it. When was the last time you saw the good guy kill the bad guy? I'm not talking about the bad guy's minions. They're not really people, in movie terms, and if you want proof look at the way their characters are usually named in the credits: Henchman 3, Cop With Scar, Tall Guard.

But Hollywood has a rule about good guys killing bad guys and that rule comes down to one word: Don't. More specifically, the bad guy has to set in motion the very thing that causes his own demise. In essence, it's the bad guy's badness that kills him. In the idealized Hollywood scenario, in spite of it all, the good guy (usually) tries to save him.

'Spider-Man' (2002): The Green Gobblin remote controls his own glider, ultimately killing himself.

'The Incredibles' (2004): When Jack-Jack self-immolates, Syndrome drops him and his cape gets caught in the suction of his aircraft.

The reason for this is moral –– and yes, Hollywood films do adhere to a pretty strict moral standard. The good guy wouldn't be good if he were to actively cause the death of the bad guy. There are exceptions, of course. In 'Lethal Weapon', for example, it's self-defense, but even that's not enough. Both Murgaugh and Riggs fire their weapons simultaneously and we don't know who actually kills Joshua.

'Jack Reacher' is notable because the main character is not an anti-hero. He's a good guy. Unconventional, sure. Off the grid, yes. But unimpeachable. A former army cop who served with honor. For him to pull out a gun and shoot an unarmed man sitting in a chair? That's Hollywood heresy.

And that makes me think two things. First, it makes me not like the movie as much. I want my heroes to be heroic. Jack Reacher leaves the film different from the way he entered. He's tainted.

Second, though, it makes me like Tom Cruise better. This was a huge choice. Most of the people involved in the making of 'Jack Reacher' would have had every reason to fight against violating the convention, not least of which Tom Cruise. In fact, few people in Hollywood even have the power to challenge that unwritten law.

Tom Cruise owns that decision, and whether you like the decision or not, it was a brave one.

Maybe I'll go into his next film with a more open mind.